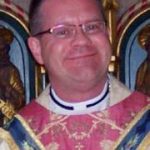 I have been a priest for 18 years most of which I spent in the Roman Catholic Church. My Bachelors Degree is from The Pontifical College Josephinum in Philosophy. My Master Degree in Theology is from The Catholic University of America in Washington, D.C. After I was ordained for two years I was sent to Rome to obtain graduate degrees in Canon Law. I studied at the “Angelicum”

Prior to my conversion to the Episcopal Church, I served as the assistant to the Bishop of Columbus, as Vice Chancellor, Master of Pontifical Ceremonies and Episcopal Vicar for Spiritual Life for the Roman Catholic Diocese. 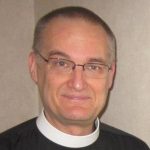 Rob is a staff chaplain at Genesis Healthcare in Zanesville. He is married to Deborah Crouse Morris. They have two adult sons, William, on mission in Colombia with the Mennonites, and Philip, finishing his last year at the University of Virginia. Rob formerly was a pastor in the Church of the Brethren and came to the Episcopal Church in a pilgrimage towards a higher sacramental emphasis. Rob likes to cook and to sing. He thinks he ought to like to go on walks for his health. He is moved by the warm reception of his priestly vocation at St. James. It complements and sustains his chaplaincy. He is grateful to Fr. Rob and all the congregation for this kindness, and thanks, God. 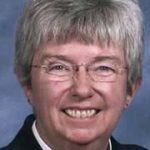 Kathryn Clausen is a retired academic physician from The Ohio State University. Her career there included serving as chief of staff of University Hospitals, Professor and Chair of the Department of Pathology, and Associate Dean for Medical Education. Her vocation in ministry began in 1995, when she entered the School for the Diaconate and graduated in 1998. She became a postulant for the priesthood in early 1999 and was ordained transitional deacon on October 28, 2000. She graduated from the Bexley Hall program for Anglican Studies at Trinity Lutheran Seminary in Columbus in 2001 and was ordained priest that year. She was Associate Dean of Bexley Hall from 1999 to 2006, and now serves as a Trustee and treasurer of Bexley Hall. She has served as parish intern and then Priest in Charge of Trinity, Newark from 2001 through June, 2005, and interim Vicar of Trinity, London, from 2005 to 2006. She served as Interim Priest and Priest in Charge at St. James from 2006 through 2009. She is the Priest in Charge at Trinity, Newark.

Most people just call her Kitty. 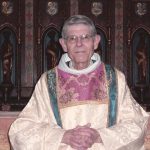 Bob did his diaconal training in the Diocese of West Virginia and was ordained as a permanent deacon in December 2005. In addition to his liturgical duties at St. James, Bob serves on the pastoral care committee and altar guild. He also volunteers for Hospice in Zanesville and Cambridge. 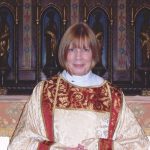 Susan Riis is a vocational deacon from the Diocese of Chicago, where she was ordained in 2002. She served a suburban parish there, as well as providing pastoral care in city and suburban hospitals and serving her local police force as chaplain.

She has enjoyed and learned from a number of professions — college professor in Brooklyn, N.Y., Federal Reserve Bank officer in Chicago, teacher of English to junior high school students in a suburban Chicago Muslim school, and parish administrator. For a few years, she lived and studied informally in Rome, Italy, where her husband, Tom Engeman, was a professor at Loyola University of Chicago’s Rome Center.

She lives in Buckeye Lake, where she can be near her son, daughter-in-law, and granddaughter. 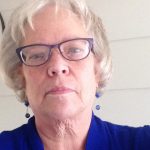 I have been a resident of Zanesville for the past 35 years. I am originally from Columbus, where I attended and graduated from THE Ohio State University. I retired from Muskingum County Board of Development Disabilities (Starlight School) in 2011.

Pat and I are co-owners of PB&M Distributing. Pat does the leg work and I do the paper work. We’re a car care product suppler.  Pat’s also involved with Ohio 18th Masonic District.

As many of you know Pat and I enjoy playing golf and try to volunteer as much as possible.

I am very happy to be part of the St. James Family. 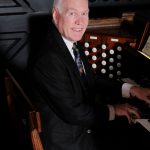 David (choirmaster and organist) has been St James’ staff musician since 2013. As a composer David thoroughly enjoys bringing new arrangements and original music to the choir. Also a chamber ensemble has been established.

In 2017, David oversaw the refurbishing and computerization of our Schantz Pipe Organ. The work was done by both the Muller, and the Peeples Herzog Pipe Organ Companies. 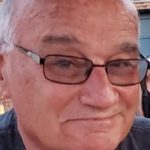 Pat and Mindy are co-owners of PB&M Distributing. Pat does the leg work and Mindy does the paper work. PB& M is a car care product suppler. As many of you know Pat enjoys playing golf and and taking a couple of golf trips a year.

Wednesday Evenings at 5:30 an Eucharist with prayers for the healing (in-person).

Wednesday Evening Prayers at 5:30 via Zoom. The Zoom invitation is located on the menu bar.

We also have a Sunday Morning Prayers via Zoom at 11:00. The Zoom invitation is located on the menu bar.